Our deer family is growing as we approach the rut! We are delighted to be welcoming some impressive new stags to our farm for breeding. These are carefully selected to ensure that the quality of our farmed deer is protected.

We will be adding a Manchurian sika stag and a white (red) stag. There are about 17 different sika species that have evolved from the various islands in Japan all with distinct features. The Manchurian sika is one of the larger species and when fully grown can weigh up to 70kg. By comparison an average adult man in Britain weighs 79kg!

Sika are renowned for their repertoire of calls. From groaning stags to clacking noises, whistles and screams, they have a huge variety of vocalisations used in many different situations. Both sexes bark when alarmed.

We have also found a magnificent white stag – a handsome addition to our farm. In certain cultures around the world there is mysticism around white deer. Striking in appearance the white stag, or hart, often appeared in stories relating to the forests around King Arthur’s court, sending the knights on adventures against Gods and fairies. One fable tells the story of how King Arthur arrived at Sir Pellinore’s Well, a magical site, without his hunting party or his horse after pursuing a white deer. The white stag was also the heraldic symbol of England’s King Richard II and even makes an appearance in Harry Potter as Harry’s Patronus Charm!

Our Estate Manager, Dominic Strutt, said: “We have carefully selected our new stags to ensure their genetics continue to enhance the quality of our progeny born on the farm. The rut is impressive. The start date varies depending on the species – with red deer it starts in mid September. During this time the stags will roar and display – in the wild you would see them fighting. At the farm we single sire rut to control the exact genetic cross between sire and dam”.

Prior to the rut, when in hard antler, all the stags’ antlers are removed for safety. This process is equivalent to trimming your toenails – removing the tissue that is no longer growing. The antlers are removed above the coronet leaving a small stump of dead antler. In wild deer, the antlers would fall off naturally, with the new antlers growing back in the Spring.

Safety comes first at Sky Park Farm and we ask all visitors to ensure they only feed the deer under supervision from a Ranger in the feeding enclosure during the rut. The stags that only a few weeks ago were happily feeding from visitors’ hands can be dangerous and cause harm if not treated with respect, as they are pumped up with testosterone and can see people as a threat to their harem of hinds – in the same way a bull would be with cows.  By deantlering and watching our behaviour around the stags, we protect our hinds, stags, visitors and farmers!

Please ask at the Visitor Centre for more information on feeding times. 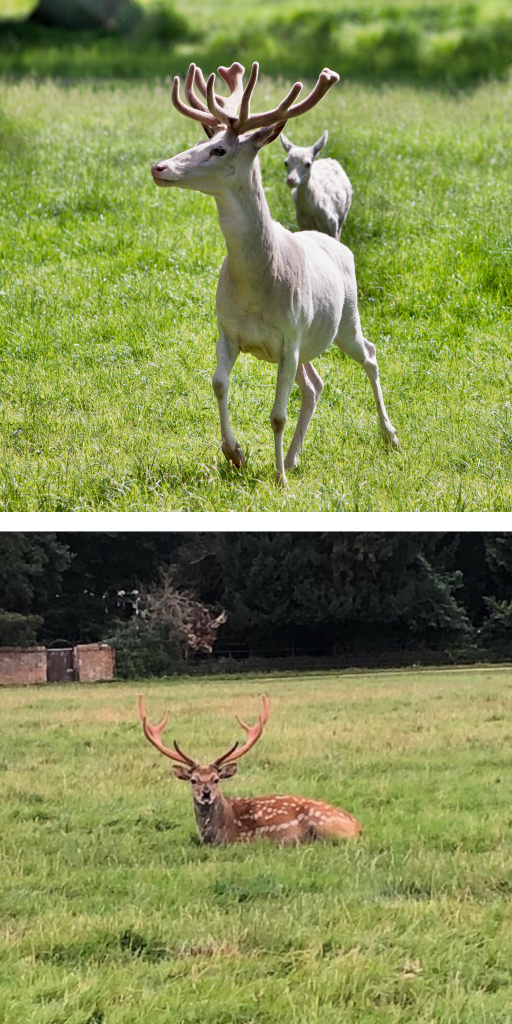 Are you curious to get a closer look at Father Christmas’s reindeer? Now you can with our special Reindeer Live Feed. With our feed, you can watch Rudolph and Blitzen in their Grotto, 24/7. See how they move, play, and […]

Look out for Sky Park Farm on Channel 5’s, Winter on the Farm, the cameras were here recently filming Yorkshire vet Shona Searson as she met our team of Rangers to health check the livestock, feed the sika and observe […]

Be among the first to know about special events and offers at Sky Park Farm. Occasionally — not too often — we’ll be in touch. We might invite you to try out new venison dishes at our cafe, to a […]